A world that was made by Mark Stevens that came packaged in Dr. Lunatic Supreme with Cheese, unlocked by purchasing it from Pier 2.

The Key of Lunacy will be awarded once The Grand Final!!!! level is complete.

Bump into the map to unlock the first available levels and see this. 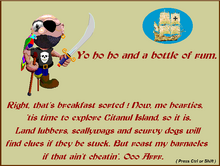 a game of footie Edit

Just "kick" the "ball" into the goalposts and grab the Brains there and the Candles around the level and leave.

Just note this map indicating how to walk in and out of this bridge with the Brains alive without drowning.

Other than that, note the Raft that spawns to the right that goes towards the Pumpkin Keychain and Candles.

a quick clear up Edit

Just shift the "Balls" to like this,once you get all the Brains, the Candle will spawn.Grab them all and leave.

If you want, you can follow Rhingo's path to safely get through the "acid" ground, or just risk it and dash to the graphite path anyway. Note the Candles are in the bottom part of the level. Grab them all and the Brains in the path and leave.

Second round of the cup Edit

Like the previous round, fetch the ball, then "kick" it into the goalpost. The fence will go down once you do, but as the Candles are amongst the crowd of Pygmies, you have to pull their aggro away and circle around for them, then run to the exit once you collected them all.

Like the previous round, fetch the ball, then "kick" it into the goalpost,then go home.

a long walk off a short plank Edit

A slightly fast pace level because you need "raft" through this, just be quick and careful.

This level can be quite tiring due to the rafting part in between, but enough patience will preserve through.

Note is this where the Squash Keychain is, in the nose section.

Like the previous round, fetch the ball, then "kick" it into the goalpost,then grab the Candles and go home.

Be very careful and make sure you shift the EXACT IDENTICAL Block top to bottom to match the according masonry. Otherwise, it's just a puzzle level.

Remember to grab the Candles before leaving.

After kicking the ball into the goal post, search the lockers and the showers for food,Brains and the Red Key and go on. Remember to grab the Candle near Dr.Lunatic,then score the final goal, get the remaining Candles and push your Trophy home.

Retrieved from "https://hamumu.fandom.com/wiki/Citanul_Island?oldid=18481"
Community content is available under CC-BY-SA unless otherwise noted.